BeyondTheNest.com review of SMART PEOPLE at Geva Theatre Center | Kids Out and About Los Angeles

Smart is the new sexy in the Kitchen Theatre’s production of SMART PEOPLE, presented at the Geva’s Fielding Stage through October 22.

Set against the backdrop of Barack Obama’s historic presidential campaign of 2008, four intellectual Bostonians – an underemployed black actress, an Asian-American psychologist, a black surgical resident with a disdain for authority, and a white neuroscientist on the brink of a shocking discovery – find themselves drawn together and torn apart by issues of race, sex, and wildly divergent worldviews. It’s a heady mix of big ideas and base human instincts that sets its characters on a collision course with each other and an America seemingly on the brink of a new era of racial justice. 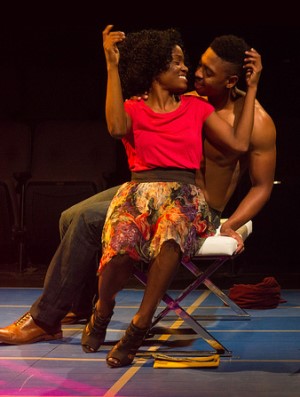 Valerie Johnston (a wide-eyed Folami Williams) is a gifted actress frustrated by directors looking to cast her as a street-wise hood girl. An accident on set brings her to Dr. Jackson Moore (Bryce Michael Wood, ripped and charismatic), a hot-headed surgeon sentenced to shifts in the E.R. for yet another battle with his hospital superiors. Ginny Yang (Shannon Tyro, underplaying nicely) is a celebrated psychologist studying the effects of stress on Asian-American women in Jackson’s clinic. Brian White (Jake Lee Smith, at turns vulnerable and commanding) is Ginny’s would-be boyfriend, a neuroscientist trying to prove that a base distrust of other races is literally coded into human brains since birth.

All four of these characters are searching for love but stymied by their own narcissism and inability to correct (or even recognize) their own flaws. Valerie’s attracted to Jackson but put off by what she sees as his tests to determine if she’s black enough. Jackson would rather quit his job than kowtow to yet another white man he feels is sabotaging his career. Ginny’s shopping addiction (my favorite thread in the play) threatens to swamp her in late-night anxiety. Brian is so sure of himself and the sweeping repercussions his study is sure to elicit he refuses to acknowledge the danger of mixing science and race.

When Brian’s increasingly disturbing work gets him canned from Harvard he gets everyone together at the world’s most uncomfortable dinner party. As Brian rages against society’s ingrown idiocy his true feelings about white privilege are revealed and everyone else is left to confront their own ideas about race.

Playwright Lydia R. Diamond has a lot on her mind, and SMART PEOPLE’s themes are unfortunately more relevant now than ever. The play gets repetitive and at two-and-a-half hours, it’s on the lengthy side. Still, it’ll get you thinking, and you might see the world a little differently on your way back home.

“Smart People” runs until Sunday, October 22 2017. It is appropriate for sophisticated teens through adults. Click here for show times and tickets.

Michael Galvin is a professional screenwriter and the co-author of the REBELS OF THE LAMP series of YA novels on Disney’s Hyperion imprint.

Subscribe to our weekly e-newsletter of arts, culture, and recreation in Rochester by clicking here!